As I’ve grown older, I have learned that, deep down, I am a sentimental guy. Well, at least somewhat. I don’t tear up while watching commercials, like, as just an example, a Folgers commercial where a mother wakes up to the smell of coffee being brewed by her son who has just come home for Christmas from a long journey in Africa. I don’t choke up for commercials like that. (Well, at least not much).

Annnywaay, when I’m talking about sentimentality I’m referring to the types of music, movies, TV and books that I love. If you’ve read my columns, you’re probably not suprised by this admission. For instance, you may have deduced this fact from my last piece about one of my favorite music playlists containing “Sunday Morning” songs. (Hint, hint, nudge, nudge; read it!)

I especially appreciate sentiment in books that are not afraid to appeal to the reader’s emotions. The books that do this well are the ones that I love, the ones that I read over and over again. These books usually contain a scene or two where a character drops their facade and expresses (or perhaps more often demonstrates through action) their truest feelings or self. Of course, these scenes are usually preceded by chapters, and in some cases other books, where the characters struggled, suffered, doubted, and despaired.

It’s my appreciation for sentiment that explains my love for Stephen King.

I know what you’re thinking:  Are you nuts? Stephen King? His books have made horrific killers out of normal, beloved things, like a car (“Christine”), a pet (“Cujo”), a father (“The Shining”), a fan (“Misery), friends and neighbors (“Salem’s Lot”) or perhaps the worst, a child (“Pet Cemetery”). Stephen King, sentimental? His first novel, “Carrie,” had a girl experience her first period in a school shower while her classmates threw tampons at her and yelled “plug it up!”  That Stephen King?

For all of his vividly imaginative works of horror, King, deep down, is a sentimental mensch. In even his most horrific stories, he often magnifies the suspense and horror by using sentiment to make the protagonists and victims (and sometimes, even the villains) more engaging and sympathetic.

King’s most sentimental works are probably the ones that have been the most successful movie adapations. For instance, the movie “Stand by Me,” a faithful adaptation of King’s short story, “The Body,” is an unabashed nostalgic look at childhood friendships and the 1950’s.  “The Shawshank Redemption,” a prison movie and an adaptation of King’s novella “Rita Hayworth and the Shawshank Redemption” is often sentimental in making its point that hope is the most important thing there is, even when that hope can be dangerous. If you don’t believe me, watch the movie’s last scene when Morgan Freeman, using words taken directly from King’s story, talks about reuniting with his friend Andy Dufresne and seeing the Pacific which he hopes is as blue as it is in his dreams.

One sentimental King story that has not been adapted for the big or small screen (at least not yet) is one of his most recent books, “Joyland,” which was published by Hard Case Crime in 2013. Hard Case Crime is an imprint created to publish crime novels, both new and old, from famous authors, such as King, Mickey Spillane, Donald Westlake and Ed McBain. As part of the Hard Case’s marketing strategy, the book covers are illustrated in a manner reminiscent of pulp crime books from the ’50’s and ’60’s, such as these three “Joyland” covers.

The covers are a bit misleading. “Joyland” is not as lurid or sexual as it would seem (although it does contain some sex and shocks). In fact, “Joyland” is only partially a crime novel. While the plot centers on the mystery of a girl’s death on a haunted house ride at “Joyland,” a North Carolina amusement park, the story is about something deeper.

“Joyland” also contains some traditional King horror/supernatural elements, such as two psychic characters and two ghosts.  However, again, “Joyland” is not primariliy a horror genre book either.

Instead, the book is, at its core, a nostalgic, coming-of-age story of the main character, Devin Jones, a failed fiction writer (not suprising as most of King’s protagonists are writers). The story is told in flashback as Jones recalls his experiences in 1973 when he was a college student and worked a summer gig at Joyland.  There, Devin befriends the other summer employees and earns the respect of the permanent workers through his hard work and his ability to entertain kids while wearing “the fur” of Howie the Hound, Joyland’s mascot. Devin also learns the “Talk,” carny terms and slang used by the “Joyland” employees, including “points” (pretty girls), “conies” (park customers), “joints” (concession stands), “shys” (carnival game) and “butcher’s games” (rigged games, stacked against the customers.)

A month or so into the summer, Devin receives a “Dear John” letter from his girlfriend. The news leaves him forlorn and lost, wallowing in self-pity and listening to maudlin songs by the Doors. Devin finds solace in the work at Joyland, so much so that, when summer ends, he takes a leave of absence from school to work at the park for a year. During that time, he discovers more about the murder of the dead girl, whose ghost haunts the ride where she was killed. Devin also suspects that the killer works at Joyland with him.

Devin also meets a wheel-chair bound ten year old boy, Mike Ross and his beautiful, thirty-something mom, Annie. Devin immediately bonds with Mike, who suffers from a terminal case of muscular dystrophy.  Mike also has “The Sight,” a pyschic ability that helps Devin on several occasions. Annie is cold to Devin at first as she struggles with her son’s sickness and the death that she knows is coming.

I won’t provide much more about the rest of the book, except one last part. Before Devin identifies and confronts the killer, he arranges a day at Joyland for Mike and Annie. It’s a bitter-sweet section as Mike has the best day of his life, the last best day that everyone knows he will ever have. King sums it up with the following:

“All I can say is what you already know: some days are treasure. Not many, but I think in almost every life there are a few. That was one of mine, and when I’m blue — when life comes down on me and everything looks tawdry and cheap, the way Joyland Avenue did on a rainy day — I go back to it, if only to remind myself that life isn’t always a butcher’s game. Sometimes the prizes are real. Sometimes they are precious.

Although this scene takes place before Devin’s confrontation with the killer, this scene is the point of the book and provides its theme:  life frequently sucks, but there are moments that you remember and treasure. It’s those moments that get you through the rest of the crap.

As an admitted sentimentalist (although not recovering, never recovering from that), I have no problems admitting that this paragraph is my favorite part of the book, maybe of any King book. I have read it many times and, each time, it moves me (even now as I write this).

For these reasons, “Joyland” is one of my favorite Stephen King books. In terms of literary craft and quality, it’s not a masterpiece or groundbreaking. However, our favorite works, like our favorite people, are usually not award-winning, once-in-a-lifetime pieces of genius. The masterpieces and geniuses we like to meet once, but the things we love are familiar, imperfect things that we like to experience over and over again.

“Joyland” is adverstised as a crime novel and it’s does well at that. The story’s real beauty, though, is in King’s portrayal of the characters, events and places. These parts are the things you’ll likely enjoy the most, especially if you’re sentimental like me and Stephen King.

“Real change, enduring change, happens one step at a time.” 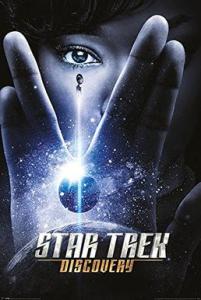 The third season of Star Trek: Discovery arrives October 15, 2020, so I’m rewatching the first two seasons of a show that did an incredible job of creating compelling new stories that fit perfectly within the continuity of the original series and yet feel modern.