This is not a guilty confession, but rather an enthusiastic declaration.

My geek status has been obvious for some time now. At my old law firm, I filled my office with Star Wars and Superman posters and superhero statues. At home, I have thirty long boxes of comics and a bookcase of sci-fi, fantasy and horror hardcover books. Heck, my law school thesis was entitled “Superman Forever” and looked at the interaction between trademark and copyright law in protecting visual characters, such as Bugs Bunny, Mickey Mouse, Captain America and, yes, Superman.

Yes, I have been flying my geek flag proudly for some time now.

Here’s the thing:  you may be a geek too.

For instance, do you avidly watch “Game of Thrones” or “American Gods?”   Welcome to the club, you fantasy nerd.

Have you enjoyed episodes of “Strangers Things,” “Westworld,” or “Lost?”  Hello, sci-fi geek.

Have you watched more than 3 of the Marvel superhero movies or did you watch all three of Christopher Nolan’s Batman movies? Sorry, but you’re a bit of a superhero nerd.

You’re probably thinking that the above doesn’t matter. You’re saying that you weren’t in your high school AV Club or Knowledge Bowl. You don’t have any superhero t-shirts or Star Wars collectibles. You’ve never attended a comic book conventions or dressed up like a Star Wars character. You can’t be a nerd.

I’m here to tell you that sci-fi/fantasy geeks are a lot like sports fans; there’s a huge range of them. Some sports fans are very ardent, playing fantasy football, calling in to sports radio every day, or wearing face paint and jerseys at games.  Others are more casual, following their favorite teams on television and reading articles about the games. Many fall somewhere in between.

Similarly, you can still be a geek and not know what “cosplay” is (costume play, i.e.,  dressing up like your favorite characters), have engaged in an internet debate on who would win in a fight between Batman and Spider-man or have figured out what Hogwarts house the Sorting Hat would have put you in.

Don’t worry; it’s not a bad thing to be a geek. The stigma against us is nowhere near as bad as it used to be, primarily because the things we love have become hugely popular and entertaining. Sure, shows like “The Big Bang Theory” became famous for making fun of us genre nerds, but no more than “Cheers” made fun of bar patrons and few people are ashamed to admit they enjoy bars.

No, it’s a pretty good time to be a geek. In fact, this may be the golden age of geek-dom. Each year, superhero movies are among the top money earners. On television, shows like “Jessica Jones,” “Walking Dead,” “Black Mirror,” and “Games of Thrones” have achieved binge status and received critical awards. As for books, well, great authors like H.G. Wells, Ray Bradbury, Isaac Asimov have been popular for decades but we’re seeing an emergence now, where fantasy and sci-fi books, such as the Harry Potter and Hunger Games series, have been some of the most popular mainstream books.

Yes, it’s a great time to be a geek and here at Making It Up As I Go, in the Nerdy Dad section, I’ll be writing about some great geeky things, both from the present as well as the past.

So, if you see an article about my favorite comic book issue, the underlying meaning of an episode of “Twilight Zone,” or the best episode of various sci-fi/genre shows, resist the impulse to ignore the post because you’re not into silly, sci-fi or sword-and-sorcery things.

There is even the chance that you’ll admit loud and proud:  “I’m a geek.” 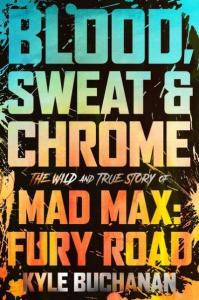 The story behind the making of the best action movie of the last ten years is an intriguing one. The 4th movie in the Mad Max franchise had so many things go wrong and so many things against that it should have never been completed, much less turn out to be so incredible.

Using mostly quotes of those involved, Blood, Sweat & Chrome tells a fascinating tale that gives insight into how genius and fate come together to make a work of thrilling art.