With The Great Quarantine, are you missing book clubs? The Duke and Duchess Podcast may be the next best thing for you. Maybe even better; with this “book club,” you don’t have to worry about cleaning the house before the book club or picking up empty wine bottles afterwards.

The ‘cast is hosted by a husband and wife duo, the Duke and Duchess (aka Chad and Liz) who have their own lives, jobs, and kids, but love to read and discuss fantasy novels. And, by “fantasy,” I mean books like The Lord of the Rings or A Game of Thrones and not The Story of O or Lady Chatterley’s Lover. (Although they do jokingly mention “the other podcast” when discussions stray to such topics.)

In each episode of the podcast, the duo covers several chapters of a fantasy novel by summarizing the events, looking at the characters’ actions and motivations, and predicting what happens next. The two also will point out their favorite quotes or scenes and engage in thoughtful debates, such as whether a character is similar to Stannis Baratheon, Grammar King of Westeros. 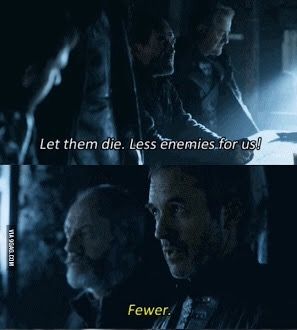 With each novel covered, the Duchess has previously read the book (several times, in fact). The Duke, however, has not and therefore, does not know what happens in later chapters or books. This format allows the Duchess to direct or highlight things subtlely without spoiling anything for the Duke or listeners in the same situation. Indeed, for the most part, the Duchess listens to the Duke’s predictions with nary a smirk or chuckle (judging by the Duke’s reactions).

As of the writing of this article, the Duke and Duchess have completed their 117th episode, which covered the end of Oathbringer, the third book in Brandon Sanderson’s The Stormlight Archive saga (NBC’s Heroes meets Japanese anime on a world with humans and evolved crustaceans). In previous episodes, the podcast covered The Gentlemen Bastards series by Scott Lynch (Ocean’s Eleven meets Game of Thrones in the Mediterranean) and The Kingkiller Chronicles by Patrick Rothfuss (which was the first book covered by the podcast). The next book featured on the ‘cast will be Gardens of the Moon, the first book in the Malazan Book of the Fallen series by Steven Erikson.

This podcast is not a professional one.  There are no commercials or scripted discussions. The Duke and Duchess are people with other jobs and parental duties and record the ‘cast about once a month in their basement when their kids sleep. Yet, while they are amateurs, the podcast and its presentation are not amatuerish. The two clearly prepare for each episode and engage in intelligent and thought-out discussions, often revealing aspects of the material that may have not occurred to the listener.

(Or does that happen only with me?  Just me? Alrighty then.)

The duo also have fun, which is the best part of the ‘cast. They are not the podcast version of the Comic Book Guy from The Simpsons addressing his opinions with the solemnity and seriousness of a self-important mortician.

While the Duke and Duchess respect and love the books, they see the humor (whether intentional or unintentional) in the material. They’ll note when a character is acting “douchey” (hence the aforementioned comparison to Stannis) or when a scene is “metal” (i.e. would be perfectly paired with a heavy metal song ala Thor: Ragnarok using “The Immigrant Song” by Led Zepplin). In one of my favorite moments, the Duke pointed out that a character’s name, Amaram, would be paired perfectly with Ram Jam’s “Black Betty”  (“Whoa, Black Betty, Amaram”), thus linking the character and the song in my mind forever. From time to time, they will perform comedic bits, such as the “Ask the Duchess” segment, one of which featured an email from a female Hogwarts student asking for help with two boys, one of whom thinks he is the Chosen One.

They also are quite willing to laugh at themselves. Virtually, every episode contains a retelling of a real life incident about the absurdities and responsibilities of being parents. Chad has joked about whether he is acting like a “Chad” and Liz poked fun at her habit of two-fisting Capri Sun juice boxes.  (Liz, if you’re reading this, please make sure to pace yourself with water between boxes).

If you enjoy fantasy novels and want to be part of a fun, book-club-like atmosphere, invite the Duke and Duchess into your life. You won’t regret it.

2 thoughts on “‘Casts: Reading Books with The Duke and Duchess Podcast”

Del: Oh, he’s drunk. How would he know where we’re going?

In The Great Divorce, C.S. Lewis explores the concept of the afterlife and whether values necessary in a mortal life of uncertainty, finite time and imperfection would serve in Heaven.